The event, titled Tracing Sacred Steps, was hosted by The Yard as part of their 50th anniversary summer season. Unlike typical dance companies, Brownbody performs exclusively on the ice, combining the technique and precision of figure skating with the freedom of expression of modern dance.

Deneane Richburg, artistic director and founder of Brownbody, first visited the arena in 2018 to see Canadian ice dance group Patine Libre, also hosted by The Yard. She returned this summer as part of her company’s first-ever tour.

The show opened with a rendition of Urban Bush Women’s Give Your Hands to Struggle, restaged for the ice and performed by Ms. Richburg.

Spectators had the opportunity to sit directly on the ice (covered with a well-insulated carpet) and engage directly with the performance. Although The Yard has hosted many site-specific events outside of their Chilmark studio, managing director Chloe Jones found that setting up an ice arena can be a particular challenge.

“Our production team has worked hard,” said Ms. Jones. “[Ice performance] is a whole different animal and we are so grateful for all the effort that went into making the show happen.”

The result was a comprehensive, deeply personal and transcendent body of work. In a play entitled Haunting Rage Resistance, performed by Joey Millet, Chelsea Ridley, Steven Smith and Ms. Richburg, with narration and singing by Thomasina Petrus, the ice dancers told the story of the 1920 Duluth-Lynchs in Minnesota, where three black men were lynched by a local mob and photos of the killings were made into postcards.

Traditionally, ice dance and figure skating move within balletic conventions, with the emphasis on fluid, elegant movements, strict gender roles and, above all, serenity. Haunting Rage Resistance deviated from these conventions as dancers squirmed, stomped and cried out their grief, bringing a modern expression to the traditional medium. 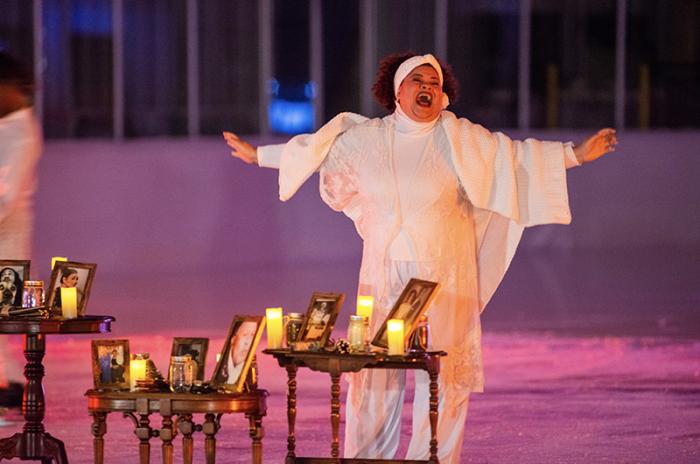 At the break, the arena’s previously liquid-smooth floor was covered in shards of ice, its surface cracked and webbed like skin stretched over a scab.

The themes of grief and memory – and their perversions – continued with Sanctuary. Candles and photos of deceased loved ones and ancestors lined the stage, culminating in a small shrine in the corner. Rather than segmenting individual acts, the performers acknowledged each other as they entered and exited the space, creating a continuous flow of performance. The choreography and design process was deeply collaborative, the performers said, and the dancers were encouraged to translate their own emotional landscape into the work.

“A year before we began work on the play, my mother died,” shared Mr. Smith. “Then the pandemic came and six months later my father died, then my sister. When we came back, I was a completely different person. I couldn’t approach it the same way.”

For the piece, Ms. Richburg said she was inspired by the African-American Ring Shout, one of the first known dances of the African diaspora. Preceding West African circle dances, the ring shout involves a group performing footwork in a counter-clockwise ring while a person in the center shouts, channeling spiritual ancestors. On the ice, Ms. Petrus’ piercing vocals served as the focal point for the dancers’ frenetic movements, with each performer falling in and out of time as if to show the swaying relationship between the individual and the community.

“As figure skaters, we were always trained to perform counter-clockwise,” Ms. Richburg said. “I saw that connection and looked for ways to incorporate this sacred practice into what we were doing.” 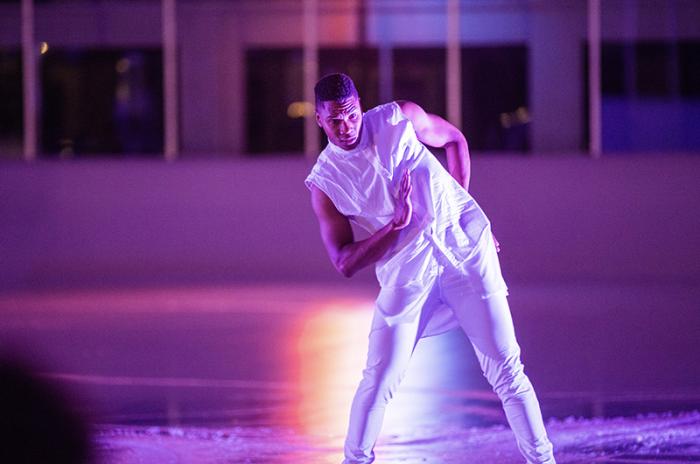 Before founding Brownbody, Ms. Richburg was a competitive figure skater who felt she had to “check her blackness at the door.” Part of Brownbody’s mission, she said, is to cultivate a space for blackness in the predominantly white world of ice skating. But this mission does not come without obstacles, she added. Hourly rates for ice rinks can reach as high as $225 in season, Ms. Richburg said, and she’s found it’s often necessary to set aside extra “buffer time” around practice to protect her group from harassment.

“We once had a site termination with a week’s notice. They didn’t even give a reason,” Ms. Richburg said. “There’s no place for blackness, or complex, multi-dimensional storytelling, or really anything but hockey.”

“We’re not going anywhere,” added Ms. Richburg. “Brownbody will always be there, but it’s definitely one of my current frustrations.”

The Yard’s summer program culminates on August 26th and 27th with previews of Underscored by Ephrat Asherie Dance. The Martha’s Vineyard Museum is also home to the retrospective Let’s Dance! 50 Years of The Yard, at the Waggaman Community Gallery, on view now through October 21st.

For more information on The Yard’s upcoming events, visit dancetheyard.org.